The most bizarre thing happened this afternoon. It was late in the day and we were alone at the ruins of St. Johns Basilica, the place where John the Baptist wrote his gospel and is buried.

We were surreptitiously approached by someone who digs at the excavation sites. He had three coins from approximately 1500 years ago. Truly, if you had seen them, you would know that they were authentic. They were silver, one had the engraved face of Constantine on it, and the other two had very, very old markings. I held them in my hand and felt a tingle down my spine. I was spellbound and entranced. It was like I was swept into another world. Jim immediately said no thanks but I wasn’t quick to dismiss it. I desperately wanted one. For a history lover like myself, to actually hold the coins from another age and be faced with the real option of owning one – well, the temptation was almost irresistible. I decided against it because 1: I knew that Jim was very against it and 2: I thought that it would be bad mojo and bad karma. Jim was against it because it was illegal and he said that if we were caught leaving Turkey with illegal coins we would likely be thrown into a Turkish prison. I took out my camera to take a picture and the man snapped his hand away and said “very clever lady”. As we were leaving, he told Jim to be very careful in a sort of veiled threat and disappeared. 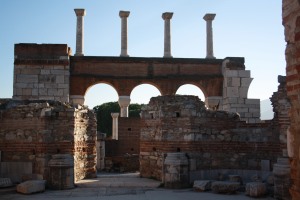 Back in our room, Jim looked up in our lonely planet book and read that if someone approaches you in a place like Ephesus and offers to sell you coins DON’T DO IT – it is punishable by a long prison term. The seller gets the money from you and then often tips off the police and also gets reward money from them. Jim is adamant that he has saved me from being thrown in a Turkish prison as I write. He looked up Turkish prisons and that is one adventure I can do without. Note to self: never buy illegal antiquities no matter how tempting.