A few days ago the trail led down into two enormous canyons. At the bottom of the first Canyon we came to a pool of water with the trail leading down into the water and out the far side. There were ropes above the water and tall canyon walls surrounding us. We looked at the walls, we looked at the water, we looked at each other. We tested the rope – definitely not strong enough to hold a person. There was only one way across. So without further ado, I attached my pack with a carabiner to the rope, stripped down to nothing, put my clothes and boots into a green plastic bag and also attached attached it to the rope. I stepped into the freezing, cold chest deep water and swam dragging my suspended pack by its straps behind me… until I hit the knot in the rope. I tried to shake the pack free, careful not to pull too hard and send it into the drink. Jen jiggled the rope from the edge, but the pack wouldn’t budge. So I dragged it back to the starting point, unclipped it, attached it to the other rope and in I went again. When I finally reached the other side, shivering and clinging to the straps, I hauled myself up the slippery slope. Then it was Jen’s turn. She doesn’t have the body insulation that I have and she went into the water with the gasp. After quickly fumbling with our clothes we got dressed in record time, then Jen tended to her toes and we were back in business.

A couple of hours later we came to the next Canyon. At the bottom was another pool. Fortunately, it was only knee/thigh deep so, to save the time redressing Jen’s damaged digits, I piggybacked her across the cold, slimy water. At the other end of the pool it was a steep ascent of ladders and handholds to the top.

The Israelis have been kind and generous all the way along, whether it is sharing water, giving a lift when you need it, sharing food, and even their home. A few days ago we took a bus for 30 km when the trail followed a road. On our way back to the trail we flagged down a car to ask directions. As we were in a military firing zone (so the sign said), we were wary of wandering too far off the road to camp for the night (we had  also been seeing fighter jets roar above the tents for the past couple of nights).

The couple in the car insisted that we spend the night at their house and they would drive us back to the trail in the morning. We were able to shower,wash our clothes, they treated us to pizza and even brought us water the following night to our camp. Such generosity. It was a real treat.

Yesterday was our tenth day on the trail and we reached our first village. Unfortunately, the little grocery store was closed, but because we were in dire need of toilet paper (I had taken to using the paper wrapper of the mornings oatmeal packet) and groceries, we caught a lift to a nearby moshav named Ein Yahov where we loaded up on fresh fruit, vegetables, olives, cheese, avocados and pita. We are now camping a few kilometers outside the little community where we have shade, wood (usually we have to scavenge from the desert scrub), and the luxury of a water tap. There  is a date grove on one side of us and long covered greenhouses on the other where produce is grown. We gathered 2 shopping bags full of sweet red and yellow peppers from the side of the road (a box must have fallen off a produce wagon).

We thought that it was only the first 7 days in the desert that required caching food and water and we have managed that. But it turns or that there are many more caches in the desert. And with only two people the cost is prohibitive. So, at this point the best available option is to take a bus to the next section. 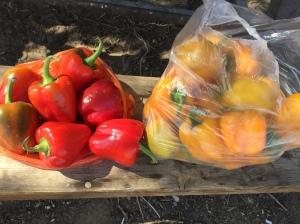