I returned to Jerusalem to the Church of the Holy Sepulture to bless the pebbles on the sacred stone. My pagan beliefs notwithstanding, there is definitely something extraordinary about that rock. Again, my head felt almost magnetized to it. I was where Christ died, now I would see where it started.

I got off the bus in Bethlehem, a little edgy to be in Palestinian occupied territory, and was immediately accosted by a dozen taxi drivers all wanting to relieve me of my shekels. But I knew the Church of the Nativity was only a half hour walk away, and politely waved them off without hesitating.

When I got there the church was closed for the day. I wasn’t, however, going to leave without seeing it. I found the Catholic Melkite church with rooms to rent, but when I inquired, they said they were full. I offered to pay to pitch my tent in their gated courtyard but I was still turned away. It was getting late and I didn’t want to wander. I found a hiding place at the bottom of a long set of stairs, enclosed on both sides, leading to the locked gate of a school yard. It was a good secure spot and I slept well. It felt very cool to be in Bethlehem, the city of David, sleeping under the bright stars because there was no room at the Inn (so to speak). In any case, I enjoyed the poetic irony of it. The sunrise was amazing! 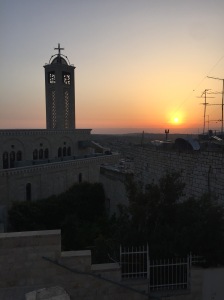 The Church of the Nativity was built in 300 A.D. by Constantine, directly above the grotto where Jesus was born. It was destroyed by the Samaritans and built again by Justintine in 618 A.D.. When the Persians destroyed all the churches in 680 A.D. the Church of the Nativity was spared because, on the wall, they saw the mosaic of the three kings and one of them was wearing a Persian uniform. When the Muslims came and converted many churches to mosques, they left that church because they also believe that Jesus was a prophet, the last before Mohammed. At 1500 years old, the Church of the Nativity is the oldest Justintine church, still in use, in the world. 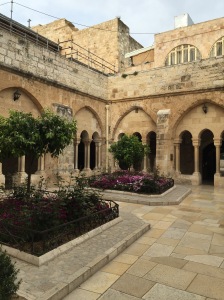 While waiting to enter the acclaimed cave, an Orthodox Ukrainian mother was agitated and gesturing wildly to me, pointing to my backpack, and touching her forehead like she was at a loss. I finally got the message – I wasn’t wearing a skirt, nor was my head covered. Trying to please, and not wanting the old girl to have a heart attack, I ran to my pack, dug out my scarf, wrapped it around my waist and placed my towel over my head (my handkerchief was too buried). With a big, genuine smile I presented myself to her – her look was priceless! It said so many things! …the crazy lady has finally clued in,… oh, what a disgrace,…but… she is obviously a little off but she is trying and I appreciate that,…and yes OK,…she’s wearing a skirt, sort of, and her head is covered, sort of,…I guess it will do. She then nodded at me and went on her way.

Around the grotto of the nativity I saw other grotto’s. One held evidence of the tombs of many babies, believed to be the babies that King Herod ordered killed while searching for Jesus. Another was the tomb of St.Jerome, who spent 35 years living in the cave translating the Bible into Latin. The grotto of Christ’s birthplace had a humble entrance and was marked by a small circle surrounded by a multi pointed star. 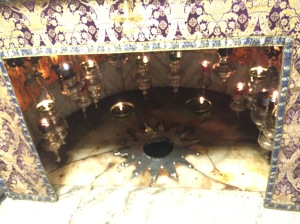 Back on the streets nobody spoke English and very few people acknowledged me, except a group of fierce looking young men who all called ahhh-lalalalalalala behind me. I half expected to get hit in the back with a camel burger. Shortly after, I realized that every woman had her arms, legs, and head covered. My legs were already covered but I used my scarf to cover my head. After that, people were more friendly, some nodding approvingly, clearly appreciating the effort. Before leaving, I bought some lemon cured olives that were delicious. 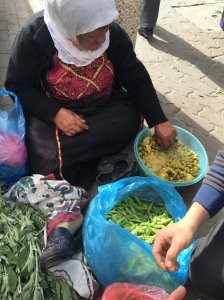 I found the bus and returned to Israel, or left Palestinian occupied territory, depending on your politics. At the checkpoint, the Israeli military boarded the bus to check for passports. In one of my more manic culling sessions I unwittingly threw out my visa. They didn’t like it but they didn’t know what to do with me. They asked me when I was leaving, hummed and hawed a little, and let it pass.

I am happily back on the shvil, slowly working my way towards Tel Aviv, continuing with care. I will be unconnected for the next five days as my data plan has now expired. I will post again when I have access to Wi-Fi. Possibly at the airport on April 11th. Shalom.