Open countryside and exploring small villages are where my mind relaxes and I can breath easy. I usually avoid spending time in the crush of the city. It was my plan, while on the bus from Osaka to Kyoto, to look for somewhere rural where I could pitch my tent and do some hiking. But Osaka led into Kyoto with no rural in between. Taking into consideration the high cost of getting around, combined with the fact that it has been snowing here for the past few days, I’m not inclined to explore the tent option anymore.

In my teens, I had a poster in my bedroom of a shrine backed by stunning countryside with Kyoto written at the bottom. It looked like the most tranquil place I could imagine and I dreamed of going there. I am not in the rural Japan of my dreams but if I have to be in the city, Kyoto is the place.

Nijo-jo Castle was built in 1603 as the official Kyoto residence of the Ist Tokugawa Shogun, Ieyasu. It is built in a simple but elegant architectural style called shoin-zakuri. It has 33 empty rooms, over 800 tatami mats (the straw mats used in traditional Japanese rooms) and superb wall paintings.

The garden is also built in the same style with a pond and a large island in its centre representing Horai-jima; The Island of  Eternal Happiness

The lady at the hostel reception desk said I should also see Rokuon-ji Temple (The Golden Pavillon). The snow makes it especially beautiful, she said. Apparently it only snows here once every couple of years but I don’t believe it; it’s been snowing almost since I arrived. Kyoto’s 1,475,000 residents also wanted to see the snow-covered Golden Temple. Imagine a free Rolling Stones concert at Mooneys Bay – that’s how many people it seemed were there. But it was indeed beautiful. 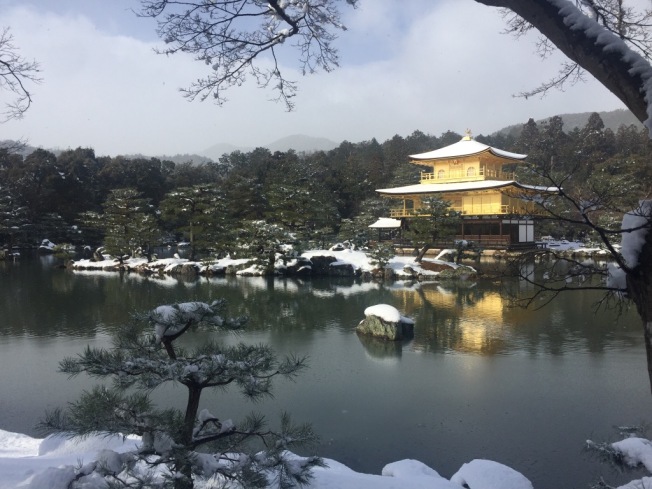 The famous Zen rock garden of Ryoanji Temple was also covered in snow when I saw it. It is a rectangular walled garden measuring 25 by 10 meters and was constructed in the Muromachi period around 1500. It has no trees and only 15 scattered rocks surrounded by white gravel. The walls are made of clay boiled in oil which has seeped out and made a beautiful Japanese style design. It was built by a highly respected Zen monk named Tokuho Zenketsu.  The stone wash basin is inscribed “I learn only to be contented”. The concept is an important philosophy in the Zen spirit. Words to live by! 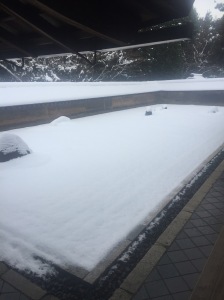