When I was feeling better, I walked across the Bridge over the River Kwai, which is part of “The Death Railway”. The strategic 415 km railway between Thailand and Burma was built by 230,000, Japanese enslaved, labourers and POW’s in 16 months (the original estimate according to Japanese surveyors was 5 years). Pushed beyond rational limits,  116,000 men died from starvation and disease. Thousands of headstones in Kanchanaburi’s POW cemetery read, “An allied soldier who died during the 1939-1945 war. Known unto God”. 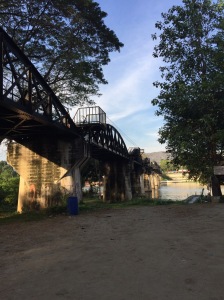 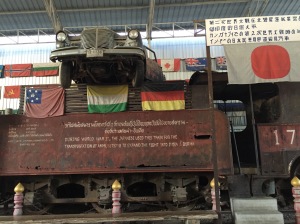 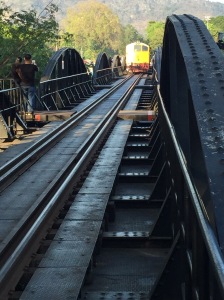 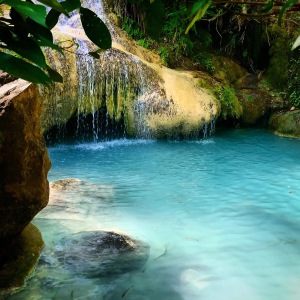 The next day, I took a 2-hour bus ride on “the little bus that could” to Erawan Falls. It is seven-tiers of waterfalls gushing through lush forest, and a challenging trail to the top. On the trek up, I met a delightful, young Dutch girl named Hanna and we had a glorious time, also accumulated a few other hikers en route. 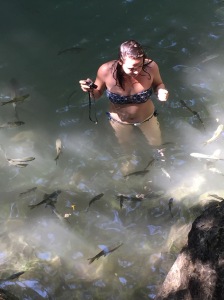 People swam in the fish-filled pools of clear, glacial-blue water at the bottom of each falls. They said it tickled when the fish nibbled at their feet. Fish biting my toes when swimming in a lake has long been an irrational fear of mine, so to literally see hoards of fish doing exactly that, sent my heart racing. Finally, determined to face my fear, I psyched myself up and dipped my feet in the clear water. Immediately, fish swarmed to me and snacked on my toes. With a shriek, I withdrew. So much for overcoming my fear. 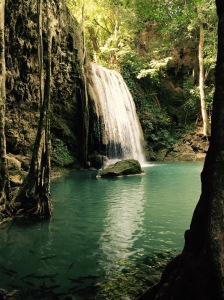 At the next tier there was a rock slide and people were having a blast. Again, missing all the fun, I decided to dive far and shallow (over the fish), swim like a bat out of hell to the rock, slide down once, and swim back. So that’s what I did. I didn’t overcome my cowardice, but it felt great to give it a punch in the teeth. 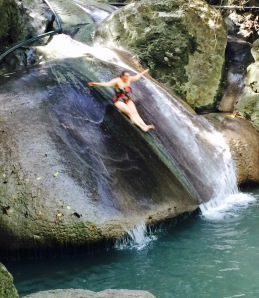