The streets of Cambodia on a bicycle is no place to be timid. The golden rule is stay alert! There is lots of ‘I’m here’ horn beeping, but no road rage. Everybody accepts the fact that everyone else has a right to be there, is just trying to get where they need to be, maneuvers to make space, and proceeds with no feathers ruffled (except of course for the live chickens). I got the hang of claiming my place in the controlled chaos and felt weirdly safer than riding a bike at home. I saw a young girl wobble her way through a busy intersection on a full-sized bike (standing because she couldn’t reach the pedals) with her baby brother in the basket. No one batted an eyelash.

I now almost always ride to see the sights and only take the bus for long journeys. On one bus trip, I offered the lady sitting beside me some of my watermelon and mango. She politely refused, but returned the courtesy when she pulled out her bag of roasted cockroaches. Mindful of protocol, I thanked the good Buddha she had refused my watermelon. When we were both finished eating, we glanced at each other and burst out laughing. We were each picking our teeth with toothpicks. There is a saying here – “same same, but different”. We got it.

I’ve never met a fruit I didn’t like and cashew fruit was no different (I didn’t even know cashews had fruit). It was stringy, but juicy, and tasted like a bitter mango with a hint of green pepper (I later found out that most people just make jam out of them or a liqueur called feni). It wasn’t until after I had already consumed several that I discovered what the fruit was, and specifically, that the creepy looking kidney-shaped blob on the end was a cashew nut!

I love raw cashews so I bit open the surprisingly tough outer shell with my teeth, and swallowed what I could of the nut. Such a bad move! Immediately my lips, tongue and mouth were coated with a thick, bitter, gluey feel that burned like hades. My stomach turned acidic, my head started to spin, and I thought I was going to pass out. I guzzled water – didn’t help. I dug out my toothbrush and brushed my teeth – didn’t help. I didn’t know what was happening! I took the bandana off my head and wiped out the inside of my mouth with it – helped a little, but the bitter stayed. For the rest of the day I felt sick. Later, I did some research. Turns out,  cashews and poison ivy/oak are siblings. Cashews contain an oily substance between the outer shell and the seed called urushiol, a strong irritant for most people and fatal for some (fortunately not for me). Also under the shell is another layer of highly toxic resin. ‘Raw cashews’ are not actually raw – they are steamed at extremely high temperatures so they can be safely removed from the shell and made edible. Who knew? – Or am I the only one who didn’t know this! After reading some horror stories, I feel pretty lucky that my only after effects were blisters inside my mouth, burnt lips, and a few spots of poison oak on my chin. The moral of the story is – sometimes it’s ok to be a little nuts, and sometimes it’s not!

(The other fruit in the picture is lotus fruit that I bought from a lotus farm. You peel off the outside green to reach the pod, which you crack open and squeeze the edible seed out. It was ok. Luckily I tried it before the cashew. The little girl is from my last guesthouse. She would hold her mothers phone, put on music and dance to it. She was adorable). 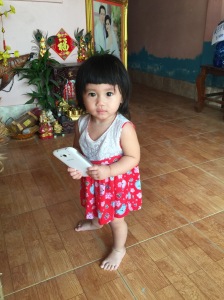