Jaipur (the pink city) isn’t pink anymore and we only stayed a couple of nights before heading to Jaisalmer in the the far western corner of India. Getting there was a 14 hour overnight train ride. We had sleeper seats and our romantic notion of a great sleep lulled by the soothing chug of the engine and the lonesome whistle as we rolled through the night was shattered under the crush of noise. Long shrill whistles, Indian music, food vendors shouting, babies crying, multitudes of people and luggage coming and going all the way through. What on earth were we thinking! While we are revelling in the unparalleled experience that is India, the general cacophony of sound and mayhem are also taking their toll. We have both lost multiple nights of sleep and are sick with sore throats, coughs and colds. But so far, touch wood, no diarrhea. We eat street food which is generally delicious; usually some form of vegetable curry surrounded by a pastry/dough that is deep fried. Our favourite so far is something they have for breakfast – a very thin circle of dough, deep fried and then covered with Dahl sauce (lentils/onion/spice boiled down) and then sprinkled with lemon, onion, parsley, cilantro, tomato, and chillies. Amazing flavours. 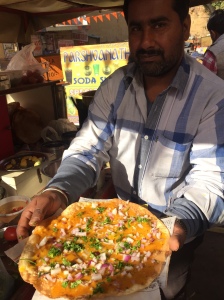 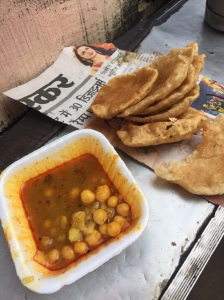 Jaisalmer (the golden city) is the quintessential desert town with golden sand coloured buildings and exquisite architecture. It looks like a scene right out of the Arabian Nights and we are loving it. In the heart of the town lies a massive sandstone fort surrounding a Jain temple full of intricate carvings that was built in the 12th century. The king allowed the families who worked for him to live within the fort and from that time on it has been passed down from generation to generation to the eldest son. Today, the descendants of those families are the only ones still allowed to live and sell their wares within the fort. Buying and selling the houses are not allowed as, technically, the king still owns the land. Our sandstone guest house ($9.00 a night) is within the fort walls and a stones throw from the temple. It all feels very exotic.

We went on a desert camel safari almost to the Pakistani border and have arrived back ‘home’ to Jaisalmer dusty, stinky, tired, and (in my case) somewhat sore in the nether regions, but happy with the experience. It took me some time to get into the flow of riding a camel. I would almost topple off when she stood up and knelt down but eventually my body relaxed and I was able to move with her. Our camel drivers cooked amazing food over open fires and the cooking lessons were an added bonus. (Sambhu taught me how to make chapati and I taught him how to write his name). Using a mixture of cumin, chilli powder, curry, fresh cilantro, coriander seeds, garlic, lentils, chick pea flour, and a variety of vegetables with rice, we ate well. We (quasi) slept without tents, under a crescent moon in the cold desert night (me paying to sleep rough is a bizarre concept) with a sky full of stars and completely different looking constellations. 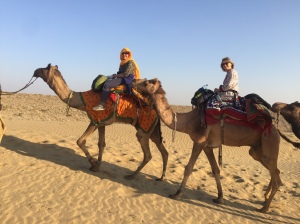 Travelling as ‘unaccompanied’ females has its drawbacks. While we always keep our arms and legs covered (and usually our provocative hair), sometimes we still get too much unwanted male attention but we have never felt unsafe. People have been kind to us (with the exception of a lady who kicked me in the Delhi train station). In fact, in Jaipur, after exploring side streets and alleyways on foot for hours (I was exploring solo as Huggie had hired a tuk tuk and taken a tour) I finally emerged onto a main street with cars and asked a bellboy at a fancy hotel how to walk back to my guesthouse. He insisted that it was too far and too complicated. He tried to flag down a tuk tuk to take me but none would go the distance (it was over 16 kilometres). He snapped his fingers and a real bellboy appeared producing two helmets. Turns out he owned the hotel. He said that he was Rajput, who are kings of the Rajasthan men, and that I reminded him of his mother. He drove me back to my guest house on his motorcycle (that was an experience). It was a lot of fun but it made me feel ancient.

Now it’s bedtime. I dearly wish that it was also ‘quiet time’ but that is just a dream.