The Ellora Caves are a series of 34 caves, temples and monasteries carved out of pure basalt stone on the hillside in the area of Aurangabad. They represent a combination of Buddhist, Hindu and Jain faiths and imagining the work involved and how long it took to build them was simply too overwhelming to process. We would look at one small corner of one room, on one floor, of one cave, on one hillside, at one site (there are multiple sites) and marvel at the carvings. Trying to wrap our heads around the enormity of all of the caves was mind-boggling. But the Hindu temple, Kailash, is Ellora’s crowning glory, and to call it a ‘cave’ is a gross understatement. Like the other ‘caves’, it was hewn from pure stone and pictures could not begin to do it justice We happened to go to Ellora on a national holiday and it took a fertile imagination to envisage orange clad monks winding their way down the rough walkways (fortunately, we both have fertile imaginations). Nevertheless, we managed to find some quiet caves and basked in them. Overall, we have seen remarkably few non-Indian tourists so far. 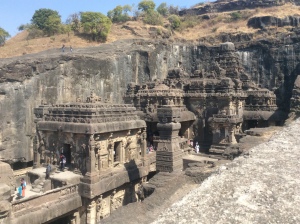 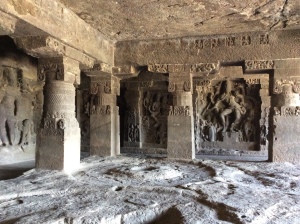 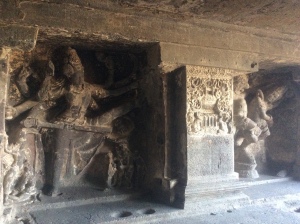 We have gone to other castles, monuments and forts; all ancient, all breathtaking and now we are off on another bus and train to continue our journey southward. We are fervently hoping that the agent from Delhi who sold us the prepaid 2nd class seat assigned train sleepers (at an exorbitant rate) comes through with the tickets. He hasn’t been reliable so far. We bought the package in Delhi when, fresh off the plane and jet lagged, we were whisked away to his office like lambs to the slaughter. Live and learn. So far we have taken a combination of train and bus (and one plane) and with the exception of one train ride, we have travelled in 2nd class sleeper seats all the way (India has 8 classes of train travel). When we booked our own ticket, requesting 2nd class, we unknowingly weren’t given a seat assignment and ended up crouched in a corner of the carriageway between first class and cattle class. We survived the 8 hour ride unscathed with the exception of a good sized rat running across our feet. Our screeching and prancing caused quite a stir but provided much entertainment for the 8 or so men jammed in with us. Stories of the two old white ladies with the backpacks and the rat will likely be the topic of many a lively campfire conversation. 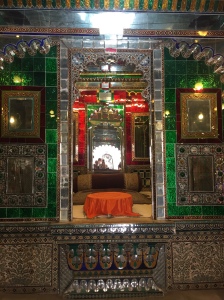 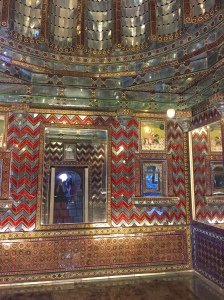