I left the Sea of Galilee the day after Easter Monday when I received notice from Kathy and Relly that my solar charger had arrived. Yippee!

En route to collect it, I stumbled upon Yardenit, the site where Jesus was baptized by John in the Jordan River (the Hebrew name for Jordan is Yarden).
It had a pastoral beauty to it, with stone benches along a walkway beside the flowing, pristine water of biblical times. 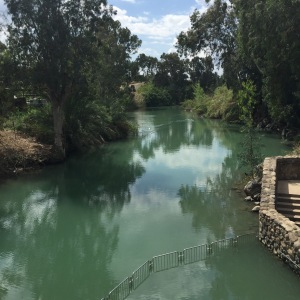 Over half a million visitors flock to the site every year, many of them making a rededication of immersion, or to be baptized for the first time, but there were only a handful when I was there. The verses of Mark 1: 9-11 were inscribed in a wall of stone in almost 100 different languages and dialects. So many places with such historical significance! It was peaceful and lovely and I was happy to have seen it.

I caught a lift from a kindly old man who was headed in my direction. He could barely see over the dash, so just to be safe, he meandered down the centreline. All the while, chattering in Hebrew and gesticulating with arthritic looking hands to emphasize particular points. Occasionally, he would weave shakily back into his lane after angry honks. Finally, my nerves shot, I indicated that I was where I needed to be. He pulled over, I thanked him and got out. It was all I could do not to kiss the ground. He was very sweet and offered to drive me farther but a bucket full of skittles wouldn’t have lured me back into the car.

Eventually, tired but sound, I was at the Penn’s and reunited with my solar panel. I went to the caves the next day. And the following morning, Kathy dropped me off in Haifa.

Haifa is a sprawling modern city. It took an hour on the bus to reach the Baha’i World Centre, and I realized when I arrived, with abject horror, that I didn’t have my hiking poles. I couldn’t believe it – I had left them at the first bus stop! Those two scarred poles have supported me through precipice  and peril across the continents for years. Fighting tears, I immediately caught another bus back the way I had just come. An hour later, trusting I had the right spot, I hopped off the bus, eyes scanning, hoping against hope. And then I saw them. They were leaning against the bench, right where I had left them. Weak with relief, I clutched them to my bosom like they were the Holy Grail. I didn’t realize I was so attached.

I entered the quiet, manicured gardens of the Baha’i World Centre. The meticulous attention to detail was astounding. Every ornament gleaming, every bush evenly trimmed, not a random stick or errant pedal to be found. The planted terraces stretched a kilometre up the mountain. No ceremonies or religious services are held in the small holy shrine where their earliest prophet rests. There is no talking, chewing gum, wearing shoes, touching walls, or taking pictures. Nobody is watching, nothing is for sale and there is no charge. I entered the shrine and passed through brown velvet curtains into the small space of contemplation and prayer. I was greeted with the delicate smell of many roses, crystal chandeliers, wall to wall Persian carpets, candles, and wall tapestries. Again, I was alone, and an aura of deep peace pervaded.

Leaving the gardens and getting out of Haifa was like being tossed out of Eden and into the lions den. It took me hours. I inadvertently ended up in the old city of Acco, another very cool ancient port, also visited by Alexander the Great. But the only thing on my mind was finding somewhere to lay my head. I ended up crawling into a small stone V-shaped shelf that was made for defence and guns within the old city wall. It butted right up to the sea and was right in the bustling mediaevalist town, but I believed I was well hidden. Then, when two Muslim girls stopped and asked to take a selfie with me, I realized that I wasn’t. I had no problem with the selfie (although not sure why they wanted me in it) but I was too tired to move or care otherwise. 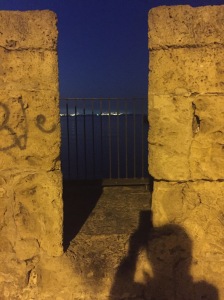 Unfortunately, I was still awake when the nasal Islamic prayers were broadcast (about 100 feet from my head) at 5 AM. I packed up my bag, and in the cool, dark morning, my trusty poles echoing on the ancient stones, I left town under the watchful eyes of street sweepers and stray cats. After a couple of hours walking, I took a train and got off at the first rural place I saw and hiked west to the sea.

So here I am, on Atlit beach. In front of me is the Mediterranean, behind me is thorny scrub, on one side of me are the ruins of Atlit Castle (built by the Knights Templar in 1217 ) and now enclosed within a restricted military compound, and on the other side, a Crusader cemetery. I sleep in the shadow of the graves of over 1700 Knights, crusaders, and pilgrims buried here, and for the last couple of days I have rested in the warm sand contemplating nothing deeper than why ants can run almost as fast as me (or why I can’t run much faster then ants). It is very windy and a fine sand seasons everything I eat.  Today I will continue south. That’s all I know. But like my son’s poster says, “Not all who wander are lost”.