When you ask an Indian a question, invariably they will answer with a head wobble. The head wobble is a cross between a nod and a shake (somewhat like a figure 8) and it can mean yes, no, it’s over there, who knows, who cares, or I don’t speak English. If it is a man, the head wobble is often followed by a penis adjustment and a spit of red chewing tobacco. 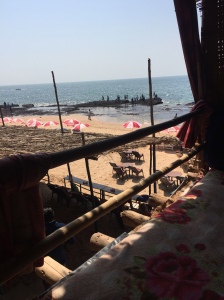 We needed a rest from our steady diet of sensory overload and settled ourselves on the beach in a three-sided bamboo tree house (minus the tree) facing the Arabian Sea, and beside another open air restaurant. We asked the man if it was quiet there. When he responded with a head wobble, we took our chances, but it looked like an awesome and unique place to stay and the price was right ($6.00 each a night). The beach scene was more ‘touristy’ than ‘traveler’, but was a welcomed break anyway as we lounged on chairs and swam in the surf. Women in brightly coloured Saries cruised up and down the strip, persistently beseeching us to look at their ‘shop’ as they stretched out slim arms laden with bracelets and other finery for sale. It was hard to resist their big, brown eyes that tugged on our western guilt at having had the good fortune to be born in a place as wonderful as Canada.

India is a country of extremes. Whatever can be said about it, the opposite is also true. I know that statement has merit everywhere, but it feels more acute in India with the stark contrast between the rich and the poor (poor in Canada is not like poor in India), the karmically devout and the swindlers, the gentleness and the cruelty, the beautiful and the ugly, the chaos and the calm, the list goes on. But by and large, while many faces are etched with hardship and creased by the sun, they generally seem a happy and carefree people. Whole families will toodle around town on scooters with toddlers between dad’s legs and mom sitting sidesaddle with a sleeping baby in her arms. They are programmed from infancy to sleep through anything and everything.

Unfortunately the same cannot be said for us and we have had our fill of the base thumping music on the beach that blares day and night. We are as rested as we are going to get, and so, with ears ringing, we are ready to move on. Tomorrow we will take a 12 hour overnight sleeper bus inland to Hampi. Maybe in the splendid ruins of the far past we will find a measure of quiet in the present. I asked a local woman who was raised there if Hampi was a peaceful place. She answered with a head wobble. Of course. 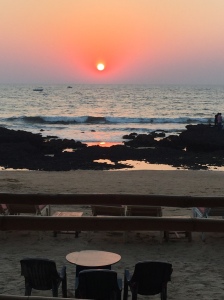