The small village of Hampi, in the province of Karnataka, used to be the magnificent, but ruined city of Vjayanager (City of Victory) from the 1500’s. It is set in a surreal landscape of golden-brown boulders, vibrant green rice paddies, and leafy banana fields. The ruins were spectacular but a highlight for me was spending time with a small group of children on a concrete step, teaching them to read and write simple English words. Huggie bought them each a pen and I bought them some paper and their eyes shone with excitement at the gifts. They were eager learners and it pulled at something deep inside of me and rekindled a childhood desire to teach English in either Africa or India. Something to think about.

We landed in a spot called ‘The Hidden Place’. It was well off the road, had a babbling brook, only a handful of tents (of which Huggie and I each had our own) and a lounging place with cushions to hang out. No internet but that was no surprise. We haven’t had internet for awhile.

I was excited to scramble up the boulders and Huggie was eager to explore the countryside on a scooter and we set out on our respective adventures. I started down the road enjoying the muscle stretch that comes with a good stride when, out of the blue, it felt like flying glass had embedded itself into the back of my thigh. I spun around to see a snarling dog biting my leg. There was no warning and I was stunned. I shook him off with a vengeance, picked up a fist sized rock and hurled it at the snapping canine. He backed off. When I was well away, I checked my burning thigh and found three skin punctures and bruising, so decided to hold off on the scramble and headed instead for the populated Monkey Temple with its 575 steep stone steps. By the time I was at the top, my leg was on fire. I was about to head home to wash and treat the wound when I turned around and saw Huggie. She was with a new friend that she had met on the way up and when they saw the bite they insisted we go to the hospital. The dog didn’t appear rabid to me but the doctor scared the bejesus out of us with “no cure” and “paralyzingly painful death” if it was rabid. I yielded to his (and Huggie’s) recommendation that I start a series of rabies shots immediately (the only series of shots I didn’t get in Canada). It was obviously the prudent choice.

Puja and Huggie had decided to spend the day together and they invited me to join them. I did and the day was a blast. We visited a few more temples where Puja, a smart, affluent, little Indian spitfire with an infectious belly laugh regaled us with stories about a few of the 2600 Hindi Gods. It was great fun to have an insider who spoke the language and knew the customs. We also went to a monastery where food was shared and we enjoyed a dinner of rice with a vegetable broth and milk poured over it. It’s an engaging experience to eat soupy rice with your hands. We finished the day at a lake, went for a ride in a ‘Moses basket’ boat, and chilled on the boulders. But when an aggressive monkey tried to wrestle Huggie’s bag right out of her hands, we took our leave.

The following day, my leg felt fine and I went on my hike. It’s hard to follow a trail on enormous boulders and I got more of a hike than I planned for. When I was ready to climb back down, I couldn’t find my distant landmark between the rice paddy and the banana field (in the sea of rice paddies and banana fields). After hitting dead end after dead end, and belly crawling through thorny brush, I finally found a place where I could continue up, and hoped to find the Monkey Temple which I knew was up there somewhere. When monkeys started swinging all around me, I worried that I was trespassing into King Louis’ territory and crouched under a large boulder, being quiet and submissive, until they left. I was probably overreacting but they have shown themselves to be aggressive and I was taking no chances. It was a happy moment when I heard voices and saw the temple flag. The stairs that had seemed so long and steep the previous day were a joy. Everything is relative. 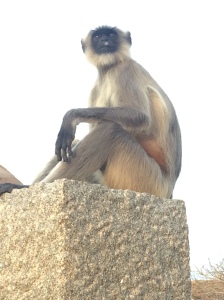