We made it out! We have just emerged from our 11 days in the deep wilderness of the Florida Everglades 10,000 islands victorious and happy, but not unscathed. We are grubby, weary, itchy, stinky, wounded, infected, and scabbed. But we still have all our hands and toes firmly secured to our bodies, and what an adventure! I have decided to post it in three segments over the next few days. At the moment are off to visit family in Boca Raton. And God willing – take a shower!

We made our first nights destination of Jewel Key. There were islands everywhere and they all looked the same but we eventually found ‘our island’ in the Gulf and felt very accomplished and proficient. Even with the heavy load, Gord’s aluminum canoe handled well. It suits us – it’s an old work horse with a back story and comes with a few bruises and dents.

Jewel key is beautiful and we have a view of the water on each side of the tent. But apparently our tiny island is also inhabited by many rats. We haven’t seen any but we’ve seen many raccoons and they look almost marsupial. It was a perfect first day on the water – dead calm and sunny, and an easy 8 kilometre paddle. For supper, Gord cooked steak on charcoal briquettes that we supplemented with pasta and Greek salad as we watched dozens of brown pelicans swoop and dive all around us. 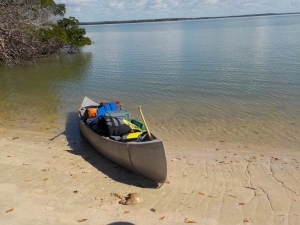 It was a longer, harder day today paddling across choppy water from Jewel Key to our next stop of Pavilion Key 17 kilometres away. When we started out, I said to Gord breezily that we would always keep land in sight. “Damn straight”, he replied back. Even though he’s an experienced canoeist, he’s no fan of big, open water. At times we were paddling through two-foot waves, which doesn’t sound like much, but it got the heart pumping. The highlight of the day was seeing a couple of sets of blue nosed dolphins beside us! Once, it was a mother and baby gliding in and out of the water. Such a beautiful and thrilling sight!

Pavilion Key has a gorgeous long beach and the island is all ours. The shells we are seeing are the quality of which you find in tourist shops and I’m loving collecting them in my white pail. Silly Gord – he said I could bring back all I wanted. 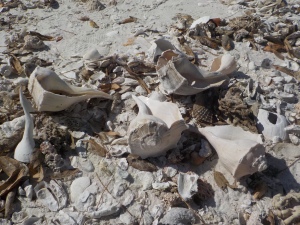 We awoke to cold, cloudy skies. The wind was strong and neither of us slept well. And we had a 16 kilometre paddle ahead of us, half of which was across open water with no land in between (if you picture the letter c, our island was at the top end of the c and our destination island was at the bottom). It was the biggest, roughest water yet and we were happy we had worked into it gradually. We weren’t terrified but it definitely kept us acutely focused. Later Gord said that his heart was in his throat a couple of times when we were almost swamped. Sitting at the front, I couldn’t see the amount of water we took on – I just kept paddling hard. I was thirsty but intuitively knew I couldn’t stop paddling even for a moment. When we were able to let up a bit and expend the energy to talk, Gord said he was also thirsty but knew we couldn’t stop paddling in the roughest stuff. After four hours of fighting the tide and three foot swells, we arrived to the other side. A few hours after that we reached Turkey Key and found a sandy spot in the lee of the island where we were sheltered from the wind. It was a safe landing after a rough day. Ten minutes later we saw multiple large black fins with white bellies right in front of us zooming about in the water where we were just paddling. Wild! A successful day followed by a delicious dinner of roasted sausages on the fire. Really hoping for a good nights sleep and an easier day tomorrow.. 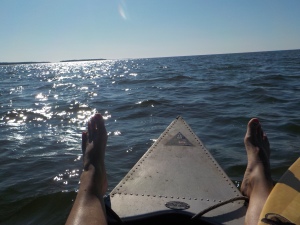 Day 4. Caught in Riptides and Stuck in Mudflats

We are camped tonight at the edge of a bay that will lead us to Broad River where, tomorrow, we will turn inland into the everglades waterway. We overshot our destination camp today and ended up paddling 23 kilometres fighting riptides. That translates to paddling hard and making little to no progress. We were bone weary when we finally set in. And then we got stuck in a mud flat at low tide. Gord got out and immediately sunk up to his knees in gooey, cloying, stinky mud. And then he fell face first. Before it was all over, we were both knee deep and couldn’t stop laughing, even though we weren’t sure how we would get our canoe, our stuff, or us, out of the mud. We ended up having to wait for the tide to come in a bit before Gord could ferry our gear to shore and drag the canoe out. It was hilarious and awful depending on which of us you talk to. We are not in the prettiest spot in the world tonight but it will do. Nice sunset, nice fire.

We are happy to leave the sand and the Gulf in our (very small) wake. Gord has open blisters on his feet from salt and sand abrasion under the straps of his sandals. The sand has become pervasive and we are tired of eating it. And the Gulf is knocking the snot out of us. We later found out that the locals don’t go into the Gulf in the winter as it’s so unpredictable and the waves can get so high. Some fishermen we spoke to swamped their motor boat yesterday in the same big water, at the same time as what we were paddling through. Gord steered us well, we paddled smart. And we got lucky! But we are ready to move into the mosquitos-infested mangroves tomorrow. While Gord’s main concern about the trip was paddling in the Gulf, mine is navigating through the mangroves. Stay tuned to see how that goes. 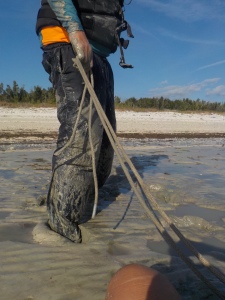