We are about to start our sixth day on the trail and the streets of Eilat feel long ago and far away. We have covered miles of remote desert, and while we know that civilization is close by (Israel is a small country) we have seen nothing of it except crossing the odd road here and there. 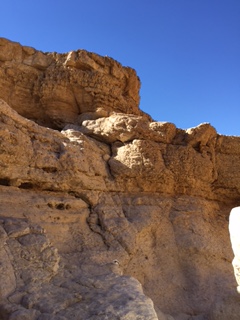 We passed through Timna National Park and I stood in awe in front of the Solomon Pillars. They are tall pillars of eroded 500 million year old rock. You can see the seam where that rock meets with even older rock. Hard to wrap your head around. There are also the remnants of an Egyptian temple dating back to 4000 BC. This whole area was also mined for copper by King Solomon and is still mined.

The colours are breathtaking and I want to pick up every second rock I see as a keepsake. Alas some of the climbs are not so much “steep” (the tame descriptor used in the trail guide) but rather vertical paths toward the sky, hemmed by sheer 1000 foot drops. Trying to navigate getting the pack and ourselves down takes all of our  concentration, strength and stamina. I think carrying  extra rocks would be a mistake.

Jen is doing amazing and is getting more adapted to the trail and stronger every day. On a huge hike up she got to the top under her own steam covering terrain that had terrified her on the first day. She has huge blisters under her toenails but carries on regardless. 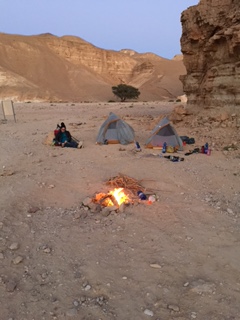 On the trail, life is simplified to the basics of survival. The food we brought is lasting well. We have been lucky with water as our first cashe lasted until we came across a school group camp out. They had an abundant supply and filled us up. And then we were able to refill again at Timna. Still, caring many liters a day is wearing on us. The solar charger is almost sufficient to keep our devices charged so we can write but often we don’t have Internet service.

The other day I was dying for something sweet. I looked down and there on the trail was a single green skittle. I couldn’t believe it. I generously offered to share it with Jen but she didn’t want to eat off the ground (imagine – like she’s the queen of England). I happily popped the nugget of deliciousness into my mouth without a second of hesitation (my veneer of civilized behaviour is much thinner than most people). I have found other assorted little gifts along the trail, including four tomatoes and a little piece of wire. I always take them as I feel they are the equivalent of the hunger games gifts from the sky.

Last night after a hard 10 hour day we were wiped out and veered off the trail looking for a place to camp that was flat and out of the wind. We were just about to turn around when we saw a car, and lo and behold there was a road just over the hill. And on that road was a building under construction. By some miracle the door was unlocked (someone’s oversight as it had ancient priceless antiquities in glass cabinets) and looked to be what will eventually be a visitor centre. So… we visited. It was a treat to spend the night indoors and we were grateful for our  good fortune. 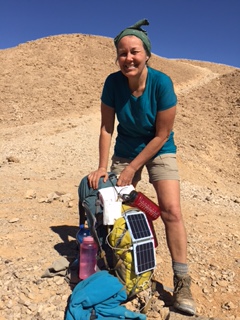 We have seen some interesting wildlife. Some ibex, a bunch of huge desert rats scurrying around the mountain side and then some little ones that we hiked through, a bright blue little lizard of some sort, some  little prairie chicken lookalikes racing ahead of us. And a couple of nights ago we saw a scorpion skittering under one of our cups. A good lesson to stay diligent in keeping tents zipped.

Also my poles collapsed once on flat ground and sent me down into the rocks, that was another good, free lesson to remember – always check the poles are tight and secure. Having one loose in at the wrong time could be catastrophic.